It was about 11:30 at night and Elsa was still up working on her computer, trying to get her book report done for school tomorrow.  She was getting very tired and her eyes were beginning to get sore from staring at the computer screen for so many hours.  She took a sip of her cold hot chocolate that had now cooled off.  The once fluffy whipped cream topping now lay flat on top like a soggy bath mat.
Her room was mostly dark except for the computer screen and a dim little desk lamp in the corner.  She heard a dog barking outside and an owl hoot a few times, as if to say, “Get to Bed.  It is very late.”  But she couldn’t as the book report was due tomorrow and if she didn’t get it done she would probably fail the assignment.
She slowly pecked away at the keys and on occasion her head nodded forward and almost landed on the keyboard.  She was tired.  Then she heard the old clock strike twelve, with twelve distinct gongs.  She thought to herself, gee, its midnight and I am still up.  Then she thought to herself, maybe if I just close my eyes for a few minutes I will feel rested and be able to continue and get this report done.
She closed her eyes and rested her hands gently on the keyboard, careful not to accidentally press down any keys.  Suddenly the ring finger on her left hand started to move.  But she was not moving it herself!  What is happening?
She woke up and thought to herself, humm, I must have fallen asleep.  But now what?  I am awake and my finger is still moving up and down without me moving it.  It seems like the “S” key on the keyboard is moving all by itself.
She glanced down at the “S” key and was shocked at what she saw!  A miniature little person pushed up the key, swung it to one side and climbed out up onto the keyboard 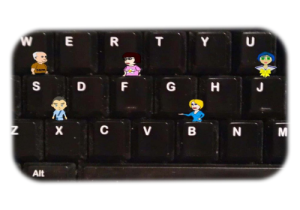 He said,  “Hi Elsa, I’m Sam, the “S” Key.”  Elsa politely answered back with, “Oh Hi.”  Then she said, “What were you doing inside my computer keyboard?”
Sam said, “That is where I work.  I thought you were finished on the computer for the night and I was packing up to go home.”  Then Elsa said, “I didn’t know anyone lived in my computer.”
Sam continued, “I am Sam the Supervisor, in fact there are twenty five more of us down there.  I am responsible to make sure everyone does their job and your computer works properly.”
He further explained, “I am the “S” key and anything that starts with “S” I am responsible for.  My friends down here have similar jobs.  Like there is Freddy the “F” key, Hilda the “H” key, Charlie the “C” key, Mildred the “M” key, Owen the “O” key and so on.  We are all specialists in our own letter.  After the computer shuts down we all climb out and go home.  We do have real homes and lives too.”
Sam rambled on, “You know that cable that comes into your house from the telephone poles outside?  Well that is how we get home.  Some of us live in different parts of the world.  We travel at the speed of light through the optic highway.  We climb out of the keyboard, into the cable box, punch in our user code and password and within seconds we are at home.  We get back to work in your computer the same way.  You probably never knew we come and go every day.”
He explained where some of the Key People lived, “I actually live in Saskatoon, Saskatchewan; six, six, seven, South Spruce Street.  Freddy lives in Freeport, Florida; Owen is from Ottawa, Ontario; Mildred lives in Mazatlan, Mexico; Hilda is from Honolulu, Hawaii and Charlie lives in Carmel, California.”
Elsa, now wide awake and staring at her new found friend could only say, “Wow, I had no idea.”
Just then Elsa’s Dad opened her door and said, “Elsa Louise, are you still up?  Who were you talking to?” Sam scurried back down into the keyboard and out of sight.  “No one, Dad,” Elsa said, “Guess maybe just to myself, as I am getting tired.”  “Well get to bed and you can finish you report in the morning.  Good Night,” said Elsa’s Dad.  He left and closed the door quietly.
Then Sam stuck his head up between the keys and said, “Is it all clear now?”  “Yes,” said Elsa. Sam then said, “I am not sure if your Dad knows he has a whole crew of Key People in his computer downstairs too.  They are not a happy bunch as your Dad works them pretty hard, late at night, early in the morning and all day, with very little time off.” 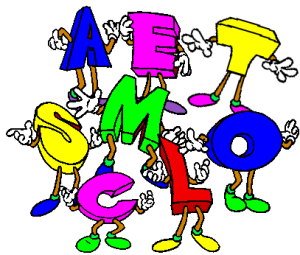